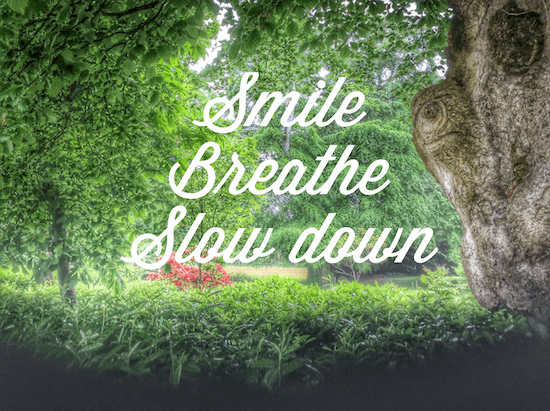 Why are therapists, psychologists, and every sort of coach and trainer always going on about the benefits of slow, deep, controlled and regular breathing?

What are they on about? Some of the answers are simple and entirely obvious. Others—not so much. Of course we need to breathe. Our bodies are reliant on a steady intake of oxygen and the expulsion of excess carbon dioxide.

Our breathing is essentially regulated by the brain, but we do have more control over breathing than we think, and with some practice, we can turn breathing into an ally to fight stress, lower blood pressure, increase our energy levels, and revitalize ourselves!

Our bodies are dependent on the right balance of oxygen to carbon dioxide for good health. A positive mental state is so very related to how our bodies are feeling, so it’s worth a look at how this balance affects our moods. Now, we’ve all heard the term “hyperventilation”.

That happens when a person takes many fast, shallow, gulps of air, uncontrolled, using only the “top” of their lungs. There’s not time enough for blood to exchange waste products for the oxygen, and carbon dioxide rapidly is depleted, sending the oxygen/carbon dioxide balance in the body out of kilter.

We actually need carbon dioxide, a fact often overlooked. Hyperventilation knocks that balance of oxygen to carbon dioxide all out of kilter. The old remedy of breathing into a bag however isn’t a good idea. It too can contribute to the imbalance between oxygen and carbon dioxide.

Let’s focus on the day to day benefits of deep, controlled breathing. Your body tissues crave oxygen, and the shallow breathing we do daily (unless we’re sporty or pro athletes) is enough to get us by, but we become lackluster, our organs ratchet down into a “low energy state,” blood sugar/insulin transformation slows, and overall, the body slows down.

A deep breath should be slow, taking 3 to 4 seconds and should place mild strain on the muscles of the abdomen and chest. After taking that breath, hold it at least 2 seconds, then release it, again controlling the release of your breath for 3 to 4 seconds. Pause for 2 to 3 seconds, and repeat the breathing process. Take at least 3 repetitions of this process for every hour you work, if you’re working a sedentary lifestyle. Don’t overdo it—you might invoke a feeling of lightheadedness, which although it passes rapidly and is utterly harmless, can still be a bit unpleasant.

If you or anyone you know are in crisis or a life threatening situation, don't use this site. Use these resources to get immediate help